Addressing a massive, impending climate catastrophe should be a bipartisan issue. Sadly, right now it isn’t. While scientific consensus overwhelmingly supports the theory of anthropogenic, or human-caused climate change, a high percentage of conservative politicians continue to voice opposition to the evidence. The Center for American Progress recently reported “150 members of the 116th Congress—all Republicans— [...] do not believe in the scientific consensus that human activity is making the Earth’s climate change.” With so many climate deniers in Congress, change feels frustratingly far away.

We wanted to know: do Republican elites in Congress represent the views of their constituents?

To build on our previous climate voter research, we looked at additional public data sources. Our analysis (and the many studies we reviewed) suggest concern about climate change isn’t partisan in the ways we might expect - especially when viewed through an intersectional or class lens.

First, data shows that concerns about climate change are similarly high among low-income Democrats and Republicans, with about 50-60% of respondents expressing concern in 2010. In comparison, almost 70% of high-income Democrats expressed concern, while only 30% of high income Republicans did the same in 2010. Upper-income Republican's concern on climate change actually declined from 2000 to 2010, even as concern increased among every other group1. 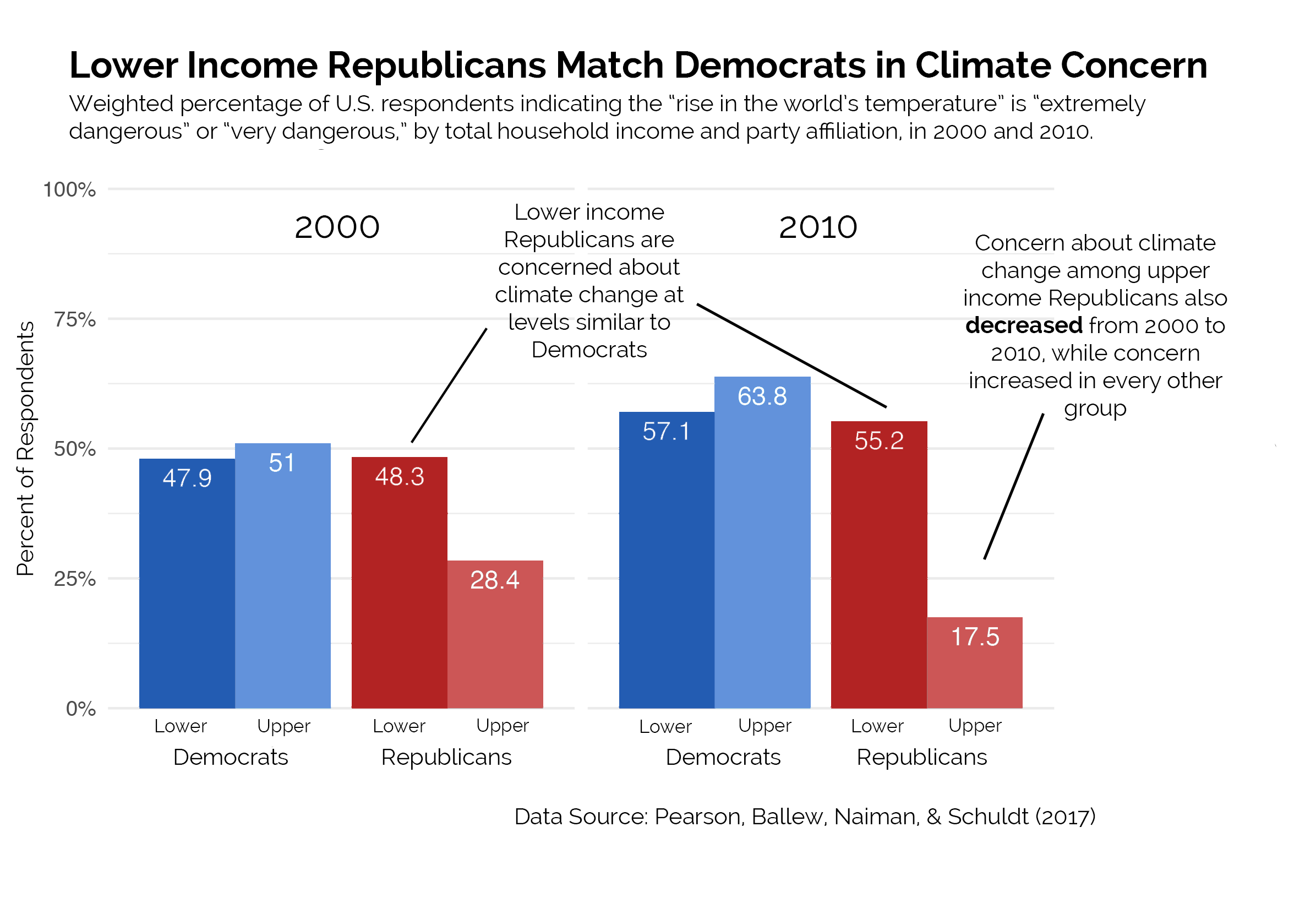 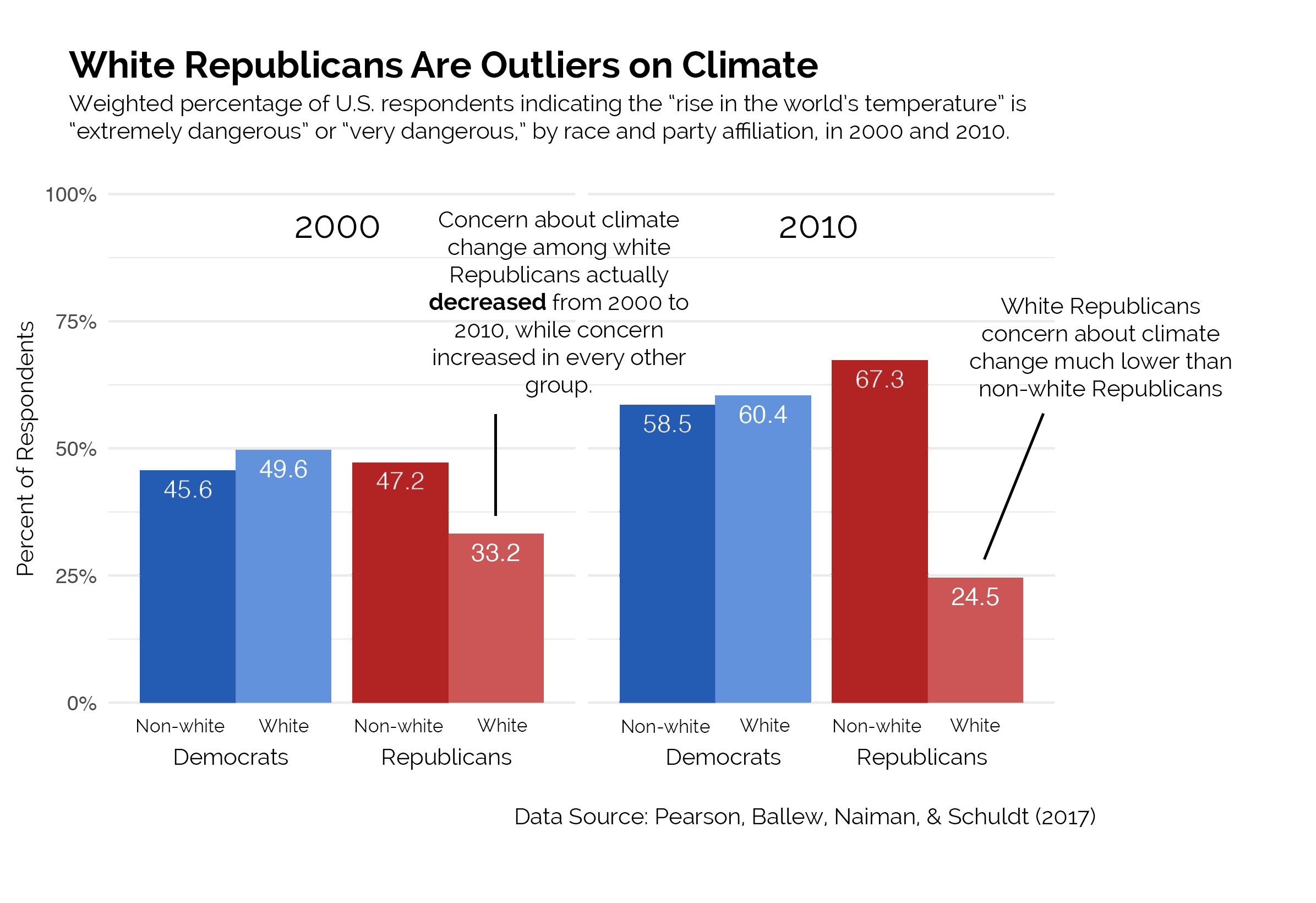 Why are white & rich Republicans less worried about our climate crisis than they were in 2000?

One theory is that in today's current polarized political and cultural environment, race and racial views "spillover" into public opinion about climate change, a view shared by Salil Benegal's recent work in the journal Environmental Politics. Benegal notes “racial identification became a significant predictor of climate change concern following [President Barack] Obama’s election in 2008, and that high levels of racial resentment are strongly correlated with reduced agreement with the scientific consensus on climate change2.” In short, having an African-American Democrat president speaking about climate change - and joining the Paris Agreement - created negative associations with the issue among racist voters. This phenomenon may not explain the full decline in concern, but suggests an interesting hypothesis for explaining part of the shift.

Another possible contributor could be a privileged variation of the "bystander effect," a view where climate change may exist, but is a trend rich, conservative elites feel insulated from because of their wealth and social safety protections. The climate crisis may be a problem for vulnerable communities, but not them.

A third possibility is the success of the conservative media ecosystem's ongoing climate denial. One survey found that Republicans who watch Fox News are more than twice as likely to deny human-caused climate change than Republican non-viewers3, and Fox News has high viewership rates amongst conservative voters.

The reality is it's likely a complex combination of factors, and we'd love to see (or hear) other research and constructive views on this issue.

We also discovered data showing variation in climate change concern between affinity coalitions within the same party. In their 2018 report, “Politics & Global Warming”, researchers from the Yale Program on Climate Change Communication and the George Mason Center for Climate Change Communication divide survey responses into four ideological groups: liberal Democrats (29% of surveyed voters), moderate & conservative Democrats (19%), liberal & moderate Republicans (12%), and conservative Republicans (23%)4. A majority of liberal or moderate Republicans believed in human-caused climate change and were concerned about the coming climate crisis. It’s also interesting to note that in every ideological group, a more respondents were worried than actually believed in human-caused climate change. This suggests a small minority individuals don’t believe humans are causing climate change, but are still worried about it’s effects.

Non-white and lower-income Republican voters are clearly more aligned with Democratic voters in terms of climate concerns. Non-white Republican voters are a small minority of the Republican party, but could make up a key piece of a new climate voter coalition - especially in swing states like Florida and Texas - if they decide to vote for policies like a Green New Deal. Recent estimates are non-white voters make up approximately 10% of the Republican constituency, including 2% Black and 6% Latinx voters5. In states decided by razor-thin margins, percentage points matter.

So while higher-income white Republicans (especially those in Congress) may not be concerned about climate change, many lower-income and non-white Republican voters likely are. As our previous work has shown, a majority support progressive action on climate - even in conservative states.

This untapped coalition could be the critical mass 2020 swing vote needed to replace climate denying incumbents and secure a climate coalition to pass comprehensive regulation, mitigation, and adaptation policies. Let's hope so. Or, better yet, make it so.

This essay is from our Data for Climate series, using insights from data and research to inform climate activism and movements for change. To read more, check out the rest of the series here, and follow us on Instagram and Twitter to stay updated. If you want to do more, definitely register to vote and consider calling or writing your representatives. We also recommend our free, local climate action search tool to find local stuff to do or groups you could join. Lastly, there are several exciting newer grassroots climate groups like Sunrise Movement, Youth Climate Strike, or Extinction Rebellion now operating throughout the United States who are doing a lot of great work to increase awareness and political pressure on the risks of climate change. Or feel free to organize your own local group or event. As always, we're happy to help you organize.

2 “The spillover of race and racial attitudes into public opinion about climate change” Benegal, Environmental Politics(2018)